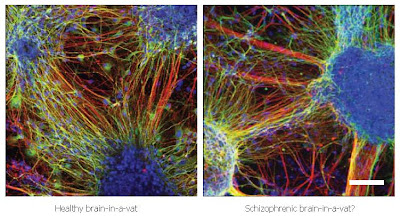 According to a new paper just out in Nature from the prestigious Salk Institute, schizophrenia may be associated with differences in neural wiring which can be observed in cells grown in the lab, thus offering a window into the normally inaccessible development of the human brain.

The paper is here, and here's an open-access Nature news bit discussing it: Schizophrenia 'in a dish'. It's certainly an incredible piece of biology. They took fibroblasts, a cell found in the skin, from 4 patients with schizophrenia and 6 healthy controls.

Using genetically modified viruses, they turned these cells into human induced pluripotent stem cells (hiPSCs), which have the ability to become any other type of cell in the human body. Then, they made those hiPSCs turn into neurons by putting them in a dish with various brain-related chemicals and culturing them for three months. Not entirely unlike those brains-in-a-vat that philosophers like to talk about...

To test the connectivity of these cells, they then infected them with a modified rabies virus, after first infecting them yet another modified virus to make that work. Rabies can only spread from cell to cell via synapses between cells; they could spot the infected cells because the rabies was modified to carry a special fluorescent protein. So they could tell how many connections the neurons made.

What they found was that cultures derived from schizophrenia patients made fewer connections: 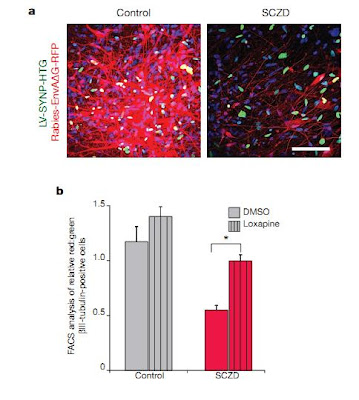 The distinct lack of red in the schizophrenia patient's dish shows that the rabies virus was less able to travel from cell to cell; the normal amount of green, yellow and blue shows that this wasn't just because it couldn't get into the cells in the first place.

OK, that's extremely cool. But then it gets a bit tricky. They tried adding five different antipsychotic drugs to the dishes for 3 weeks. Four did nothing; one, loxapine, made the cells form more connections. But it's odd that it was loxapine, a drug with unremarkable efficacy, which did this; they also tried clozapine, the only antipsychotic which is verifiably more effective than any others, and it didn't.

Loxapine is similar to (and metabolized to) amoxapine, an antidepressant; that's an issue, I would say, because we already know that antidepressants cause cells to sprout new connections. It would have been good to have used some antidepressants and some other medications as a control.

They did a lot of other work, but the data are hard to interpret. The cells 'mis-expressed' about 600 genes, but we're not hold how many genes they tested. 25% of them had been previously linked to schizophrenia, but you could say that of lots of genes: is that more than would be expected by chance alone?

The patients were also unusual. Patient 1 suffered an onset of schizophrenia at age 6, and died by suicide aged 22; childhood-onset schizophrenia is extremely rare. Patients 2 and 3 were brother and sister; this means their data may not be independent, so there are (being conservative) only really 3 patients here.

Overall it's a great idea, a technical tour-de-force, and I'm sure we'll be seeing much more work along these lines on schizophrenia and other neurological and psychiatric disorders. However, as it stands, schizophrenia remains mysterious.

New Atheism: A Disaster Comparable to the Tea Party

Have you ever wondered what happened to the patients of the Kirsch study once they were treated or once the studies/trials had stopped? We know that these patients were not severely depressed and their depression did not improve after standard (?) antidepressant treatment. Recall that placebo was as effective as antidepressants. So, if they were "non responders" but, nevertheless, they did not suffer from severe depression, where would they go? How would they be treated? Would they turn into patients with "Treatment Resistant Depression"? I am afraid that this is very likely. What we are left then is with a group - an inmense group? - of patients who initially did not suffer from a severe form of depression and who have turned into patients that are now resistant to treatment (!). Isn't this awful? But there are other alternatives that are even more sinister: it is said that patients with bipolar depression do not improve when treated with antidepressants; the obvious inference is the temptation of diagnosing this patients as bipolar patients. Thus, we started with a group of patients with mild symptoms of depression who are now either "Treatment resistant" or "Bipolar." This is not just a product of my vivid imagination, it is happening day in and day out in a number of Mood Disorder Units all over the world.

And this, is my first post in English in three years! Is it intelligible? Hopefully!

Consider this a test run.

Will the child with mania please stand up? [EDITORIALS]

Will the child with mania please stand up? [EDITORIALS]: "

Rates of bipolar disorder in any sample will depend on the sample studied,
the interview used, with whom, how the information is integrated, the criteria
applied, and the conceptualisation of a manic episode and its symptoms. A
cross-national diagnostic study is needed to determine the implications of
different approaches and definitions.